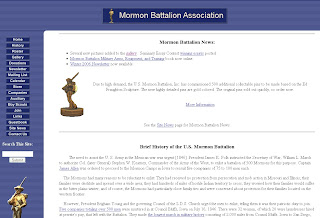 This website has the complete transcribed company rosters including the officers, privates, and guides. One of the guides that might spark you interest is Jean Baptiste Charbonneau (the son of Sacajawea and Toussaint Charbonneau). The women are listed with the companies and also includes the names of the children. The databases include pictures which are searchable under the Gallery Link. Some of the men that served in the battalion also have a short biography on this site. If you have ancestors that participated in the Mormon Battalion or think that you might have an ancestor who was in the Battalion, this site is worth checking out. Click here to be redirected to the Mormon Battalion website. Have fun in your quest.
Posted by Our Future Rooted in Our Past at Friday, June 01, 2007