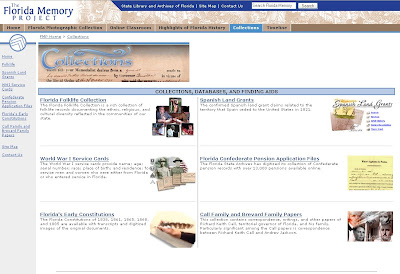 The Florida Memory Project site is a collection of databases including WWI Service Cards, Spanish Land Grants, historical pictures and music, Florida Confederate Pension Records and a few other databases.

In order to utilize this site you must search each database on an individual basis. Each database has it's own individual search engine with search criteria specific to the database. The databases contain the following information:

"For each person, the cards provide name; age; serial number; race; place of birth; and residence at time of entering service. some cards also provide the organizations/ships served (with dates of beginning and transfer); engagements; wounds/injuries sustained in action; time served overseas; discharge notations; and general remarks. The Navy cards note the sailor’s rate as well as rank."

"The series consists of "dossiers" containing those papers which were filed in evidence and confirmed as valid claims before the Board of Land Commissioners. Each land claim with its supporting documents was later encased in a manila jacket on which appears the name of the applicant, the number of acres claimed, disposition of the claim, and page reference to the American State Papers. The supporting documents include petitions or memorials to a governor for land; surveys or plats; attests; deeds of sale, gifts, wills, bequests, and exchanges; applications; and translations of Spanish documents. Most of the documents for claims in West Florida are missing."