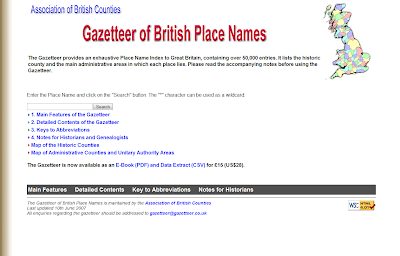 The Gazetteer of British Place Names maintained by the Association of British Counties, is another excellent resource for Family Historians and Genealogists to research that will provide information regarding the current location of historical records repositories, which will decrease the amount of time trying to locate the proper place to request for records.

According to the website, the authors state that this site has advantages over on-line gazetteers because of the following reasons:

"1) Firstly, it has the most comprehensive coverage of any on-line gazetteer in that it covers the whole of Great Britain and contains over 50,000 place-name entries. It contains commonly accepted spelling variations of place names including an exhaustive coverage of Welsh and Gaelic spellings. It provides full details of the correct county for places both prior to and following the Counties (Detached Parts) Act 1843."

"{2) An important feature of the Gazetteer is that the places it lists in Column 1 are settlements (e.g. villages, hamlets, towns, localities) rather than administrative areas (i.e. parishes, townships, tythings etc.). Many gazetteers aimed at genealogists only include the names of these latter types of administrative areas. Within a parish there can be several separate settlements each with its own distinct name and identity. In some cases these would be recognised on Census Reports as "townships", "tythings" etc. and they may appear in gazetteers in this guise. However, large numbers of identifiable "places" do not fall into these categories and usually do not appear in Census Reports (or in the various on-line gazetteers based upon these). This is particularly true in the case of the large number of new towns and villages which developed in the 18th and 19th centuries. Many of these never gave their names to parishes. However, most parishes did give their name to the main settlement within them. Hence, these parish names do appear in the Gazetteer."

Also discussed on this site is a discussion regarding the term counties in the early 1970's where the Local Government Act abolished the counties, when in fact they had abolished the "administrative counties" and "county boroughs" created by the LGA 1888 and create a whole new set of local government areas." The key word here is "administrative" and "local government areas." The change did not effect the geographical counties. If you would like to read more about the challenges of English Gazetter research, please click Notes for Historians and Genealogists.

If you would like to search the index, please click
Gazetteer Index.>
Posted by Our Future Rooted in Our Past at Monday, October 08, 2007