A Call for Bilingual Volunteers! 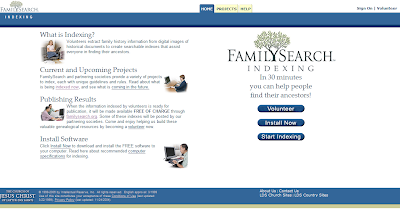 Below you will find the press release from FamilySearch regarding the Latin American Genealogical Records. The Indexing Project that the Family History Library in Salt Lake City is well underway working on the 1900 US Census, 1871 Canadian Census, 1930 Mexico Census, some individual State Census records from the 1800's, and a German Census records to name just a few. If you haven't volunteered yet, come join the fun and help get the records indexed so that we can all benefit. Once the information being indexed is ready for publication, it will be made available for "FREE" on FamilySearch. Indexing is easy and requires only your time (which you determine how much time you can give)and a computer.

Below is the press release from The Family History Library and Family Search regarding the request for assistance with the Indexing of millions of Latin American Genealogical Records.

SALT LAKE CITY, UTAH—the world's largest repository of genealogical records—is calling for 10,000 volunteers who can read both English and Spanish to help index Mexican, Argentine and other Latin American records for the Internet.

FamilySearch is embarking on a massive initiative to digitally preserve and index millions of Latin American records that are now difficult to access because they are located on microfilm or in an archive.

The first target is the Mexican census of 1930. People interested in finding their ancestors in that census now have to hunt among 506 rolls of microfilm at a special library. When the project is finished within about one year from now, people with Mexican ancestry will be able to search for relatives easily from their computers at home.

The project is being launched in cooperation with the National Archives of Mexico.

Paul Nauta, manager of public affairs for FamilySearch, said the volunteers could spend as little as 30 minutes a week indexing records from their home computers. Volunteers should register at FamilySearchIndexing.org, which will allow them to download one batch (one census page) at a time. Volunteers simply type in the information highlighted on the digital image. Each batch should take about 30 minutes.

"The 1930 census project will be the first fully indexed census for Mexico," Nauta said. "When finished, the database will be a tremendous asset to family historians with Mexican roots."

Nauta said that census records are especially valuable because they include a large portion of the population and can provide details about individuals which may not be available on some church and civil records.

"The 1930 Mexico Census is priceless to genealogists because it is the most recent, publicly accessible census for Mexico. It can provide an ancestor's age, birth year, religion, birthplace and occupation, explain an individual's relationship to family members and provide other family information," Nauta added.

The 10,000 bilingual indexers will be added to a growing army of volunteers that will soon top 100,000, well ahead of year-end targets.

Over the past months, FamilySearch has been preparing digital images of the various census pages and many other records for placement on the Internet. However, without an index for the material, family-tree enthusiasts would still have to go through the pages one-by-one looking for their ancestors.

"Once indexed, the records are searchable in seconds, just like looking up a name in a phone book—except quicker, easier and online," Nauta said.

The 1930 Mexico Census marks the first Latin American project for the Web-based FamilySearch Indexing program. In addition, FamilySearch indexers just completed the Argentina census of 1895 and will soon start on that country's 1855 census.

A four-year project to digitize historical land and property documents and wills in Paraguay has just begun, and civil records in Nicaragua will become part of the indexing program within 30 days.

FamilySearch is a nonprofit organization sponsored by The Church of Jesus Christ of Latter-day Saints, whose members consider it a religious obligation to identify their families. FamilySearch maintains the world's largest repository of genealogical resources, accessible through FamilySearch.org, the Family History Library in Salt Lake City and over 4,500 family history centers in 70 countries.

Posted by Our Future Rooted in Our Past at Friday, October 12, 2007