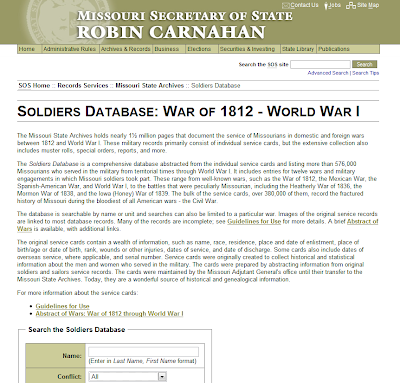 The Missouri State Archives holds approximately 1.5 million pages of documents regarding the men and women that have fought in the various wars ranging from the War of 1812 down to the First World War. The records contained on this site were extracted from individual service records and muster rolls. You might wonder what genealogical value can be found on these types of records. According the Missouri State Archives you can find the following information on the records:

Please note that on the individual cards there are several lines for comments and these comments can provide useful information as well. Also please note the following comment by the Missouri State Archives: "A fire at the National Personnel Records Center in 1973 destroyed many military records. An estimated 80% of the U.S. Army personnel records created from 1912 to 1963 were destroyed. The fire did not damage U.S. Navy and U.S. Marine Corps personnel files."

A great feature of this site is that it allows you in many cases to view the original document. The wars that are covered in this database include:

If you would like to read the abstracts for each of these wars, click War Abstracts to be directed to the history of the wars. If you prefer to just begin researching the database, please click Soldiers Database.

Posted by Our Future Rooted in Our Past at Thursday, October 25, 2007