If you are from the United States and you hear the word Mayberry, the picture that might be conjured up in your mind could be the Mayberry RFD from the The Andy Griffith TV Show. The Mayberry Home Page has nothing to do with the small town of Mayberry, but is the brain child of of the website's author Peter Mayberry. 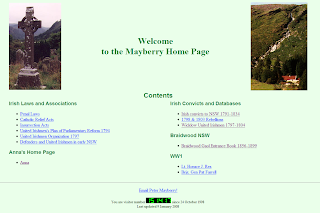 * Wicklow United Irishmen 1797-1804 - This database contains information regarding the rebels of the county of Wicklow that were involved in the Irish Rebellions.

The Braidwood Goal in New South Wales database contains:
* Braidwood Gaol Entrance Book 1856-1899 - compiled from the Registry entries at the Gaol. The websites author, Peter Mayberry states, "Unfortunately the exact date & reason for admission was not recorded in the register. An approximate time period was interpolated by using the ages of some of the "inmates." It must be stressed that travellers and others used the gaol's facilities as it offered the cheapest accommodation."

The website is user friendly and provides you with a variety of valuable genealogical information including birth dates for the convicts. The information is presented is extracted information and the original documents are not viewable online. Having said this, documentation of each of the records is provided listing the primary and secondary sources for you to look at if you so desire. If you would like to research in this site, click Mayberry Home Page. Have fun!

Posted by Our Future Rooted in Our Past at Thursday, March 27, 2008