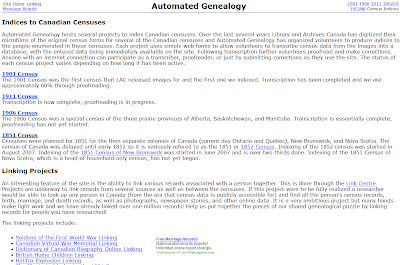 When I first came upon this site a few weeks ago, I was very curious as to how the name "Automated Genealogy" related to the site. When I think of Automated, I imagine something being done for me with out much effort on my part. As I have investigated the site further, I have come to understand that this site truly does have Automated Genealogy for the genealogist and family historian. The Automated Genealogy website databases are free to search. It has wonderful databases that are available to be searched with a click of button for those with Canadian ancestory. The site contains the following databases:

1901 Census - The transcription is complete and 60% completed on proofreading. This census has a surname search box that can be used to search the entire 1901 Census database.

1911 Census - The transcription is complete and proofreading is progressing. The 1911 Census only allows for searches utilizing the surname search box by first clicking on the the province link that you would like to investigate and then typing in the surname you are researching.

1906 Census - The 1906 census includes the three provinces of Alberta, Manitoba, and Saskatchewan. The transcription is nearing completion and proofreading has yet to begin. This census has a surname search box that can be used to search the entire 1906 Census database.

The searching capabilities provided in the 1901 and 1906 census records database is more intuitive that in the 1911 census. I hope that this will change as the project progresses. Another nice feature of the site is that you are able to view the original documents from the census records. Once you have searched for a surname, you will be given the results like on the page to the right. If you notice there is a column to the far right that has numbers that are in blue. Clicking on these numbers will take you the extracted document. At the extracted document (which is easily read), you must click on the image link above the document to view the original. I would suggest that you view the document on the split screen or in a new window, but select the larger size. It took me a few minutes to figure out how to view the actual document but it is possible. The actual document is extremely important to view in my opinion, as extraction work can have mistakes as we are all human.


Another very unique, interesting and promising feature of this site is the Linking Projects. The website states:

"An interesting feature of the site is the ability to link various records associated with a person together. This is done through the Link Centre. Projects are underway to link records from several sources as well as between the censuses. If this project were to be fully realized a researcher would be able to look up any person in Canada (from the era that census data is publicly accessible for) and find all the person's census records, birth, marriage, and death records, as well as photographs, newspaper stories, and other online data. It is a very ambitious project but many hands make light work and we have already linked over one million records! Help us put together the pieces of our shared genealogical puzzle by linking records for people you have researched!"

Some of the linking projects are:

This site offers a treasure trove of information for the genealogist and family historian searching for their Canadian Roots. This is a very ambitious project which will only continue to grow and improve with time. They are accepting volunteers to assist in the extraction work if you are interested in helping to further the project. If you want to check out this exciting website, click Automated Genealogy.
Posted by Our Future Rooted in Our Past at Thursday, September 20, 2007

Great write up on automatedgenealogy!! I think you cover everything. I would just add that there is a message board attached to the site that provides great insight for the new members.

Sean, thank you for mentioning the message boards. The boards are always provide helpful hints and tips. Thank you for the comments.

All you get when you try to get anywhere on the site are errors and you wait and try again... for days... and this is all you see ERROR: com.mysql.jdbc.exceptions.MySQLSyntaxErrorException: User core1911@localhost has already more than 'max_user_connections' active connections

The only way to get help is through their message boards but all you get when you try to go there is phpBB : Critical Error

Could not connect to the database

Anonymous, I am sorry that you are having trouble with the site. I tried the site this evening, and the links worked fine. You might want to try it again. If you continue to have difficulties, you could contact Automated Genealogy site for further asssitance.