Leitrim-Roscommon Website is a wealth of information regarding not only the counties of Leitrim and Roscommon Ireland, but also the counties of Mayo and Sligo. If you want to learn more.....Read on. 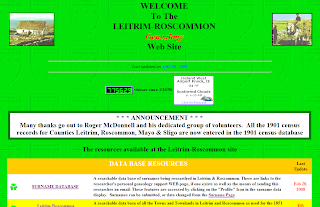 Leitrim and Roscommon are located adjacently on the west side of Ireland. The authors of this site have provided user friendly search engines and databases to include the following:

*Surname Database of surnames being researched in Leitrim and Roscommon. At times you will see links to a researchers personal web page and can also contact them via email.

Leitrim-Roscommon Townland Database is a searchable database of all the towns in these two counties used for the 1851 census.

IreAtlas townland database is a database of ALL the towns in Ireland during the 1851 census, including information regarding the County, Barony, Civil Parish, Poor Law Union and Province.

Griffiths Database is a database which contains the Griffiths Valuation of Galway, Leitrim, Limerick and Roscommon. The database is extremely large and is stillunder development but the authors of the site have allowed limited on-line searchingcapability.

1749 Elphin or Synge Census contains transcribed data from the census in the Diocese of Elphin. The information is this database cover most of Roscommon and Leitrim.

Map Resources include maps for the Towns, Civil Parishes, Baronies, Catholic Parishes and Poor Law Unions in Leitrim and Roscommon.

A Soundex Code Generator is a free gift from the websites' programmers. For more information in regards to soundexes, click What is a Soundex?

The Kilglass Population survey was put together by Terry McCormick. The survey contains a tabulated listing of the population for the Civil Parish of Kilglass between 1749 and 1881.

This is but a few of the databases and informative links on this site. A message board has been incorporated onto this website allowing the user to post a query to the group (registration is required before being allowed to post). If you have Irish ancestry this site might be able to help you break through your brick walls. Click the Leitrim-Roscommon website to view the many avenues of research for your Irish ancestors. Have fun!

Posted by Our Future Rooted in Our Past at Thursday, April 10, 2008